Carbohydrate restriction is a more important variable. Higher protein intake doesn’t kill ketones, as evidenced by Phinney 1983 and Coleman 2005, nor does it hinder weight loss on low carbohydrate diets, as evidenced by Phinney 1980 and Coleman 2005. The women in Coleman’s study were eating ad libitum and there was no correlation between weight loss and ketones. Protein intake went up and body weight went down.

Lakshmi писал(а): Из книги The Ketogenic Diet: A complete guide for the Dieter and Practitioner by Lyle McDonald

Ontario писал(а): If You Eat Excess Protein, Does It Turn Into Excess Glucose?

Because some people have said that when you eat protein above basic requirements it turns into sugar, the question some dieters have is whether they need to count excess protein toward their carb counts ⁴. They want to know if eating an extra 30 grams of protein means that they have added some 20 grams of sugar into their bloodstreams that now has to be dealt with just as if they had eaten 20 more grams of carbohydrate. This is the conclusion we were setting out to deny. Protein you eat in excess of your needs does not become extra blood sugar, unless you are severely diabetic.

However, this does not mean that eating too much protein has no adverse effects, or that keto dieters should be unconcerned about excess protein intake! In particular, there is another important reason that keto dieters minimize the carbohydrate they eat — to increase the levels of ketones in the blood. So a second question, and one that we did not address in the last post, is whether excess protein inhibits ketogenesis, the production of ketone bodies. In contrast to the situation with gluconeogenesis, we suspect protein does inhibit ketogenesis. If so, that's a valid reason for not eating more than you need.

Непрочитанное сообщение Joker » 03 окт 2015, 23:19
How much protein does one need to be in nitrogen balance?

The figure below, from Brooks et al. (2005), shows a graph relating nitrogen balance and protein intake. A nitrogen balance of zero is a state in which body protein mass is stable; that is, it is neither increasing nor decreasing. It seems that the graph was taken from this У вас нет необходимых прав для просмотра ссылок. The participants in the study were endurance exercisers. As you can see, age is not much of a factor for nitrogen balance in this group. 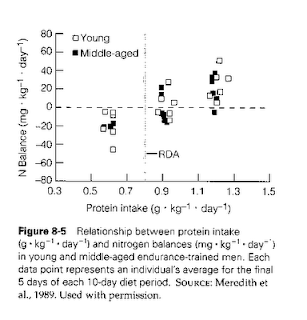 But what if you want to gain muscle?

Wilson & Wilson (2006) conducted an extensive review of the literature on protein intake and nitrogen balance. That review suggests that a protein intake beyond 25 percent of what is necessary to achieve a nitrogen balance of zero would have no effect on muscle gain. That would be 69 g/d for a person weighing 100 lbs (45 kg); 105 g/d for a person weighing 155 lbs (70 kg); and 136 g/d for someone weighing 200 lbs (91 kg). For the reasons explained above, these are also overestimations.

What if you go well beyond these numbers?

The excess protein will be used primarily as fuel; that is, it will be oxidized. In fact, a large proportion of all the protein consumed on a daily basis is used as fuel, and does not become muscle. This happens У вас нет необходимых прав для просмотра ссылок. So excess protein can make you gain body fat, but not by protein becoming body fat.

Dietary protein does not normally become body fat, but will typically be used in place of dietary fat as fuel. This will allow dietary fat to be stored. Dietary protein also leads to an insulin response, which causes less body fat to be released. In this sense, protein has a fat-sparing effect, preventing it from being used to supply the energy needs of the body. As long as it is available, dietary protein will be favored over dietary or body fat as a fuel source.

Having said that, if you were to overeat anything, the best choice would be protein, in the absence of any disease that would be aggravated by this. Why? Protein contributes fewer calories per gram than carbohydrates; many fewer when compared with dietary fat. Unlike carbohydrates or fat, protein almost never becomes body fat under normal circumstances. Dietary fat is very easily converted to body fat; and carbohydrates become body fat when glycogen stores are full. Finally, protein seems to be the most satiating of all macronutrients, perhaps because natural protein-rich foods are also very nutrient-dense.

It is not very easy to eat a lot of protein without getting also a lot of fat if you get your protein from natural foods; as opposed to things like refined seed/grain products or protein supplements. Exceptions are organ meats and seafood, which generally tend to be quite lean and protein-rich.

The third dietary factor potentially affecting physical performance is adjusting protein intake to bring it within the optimum therapeutic window for human metabolism. The studies noted herein [13-15,20] demonstrate effective preservation of lean body mass and physical performance when protein is in the range of 1.2 – 1.7 g/kg reference body weight daily, provided in the context of adequate minerals. Picking the mid-range value of 1.5 g/kg-d, for adults with reference weights ranging from 60–80 kg, this translates into total daily protein intakes 90 to 120 g/d. This number is also consistent with the protein intake reported in the Bellevue study [9]. When expressed in the context of total daily energy expenditures of 2000–3000 kcal/d, about 15% of ones daily energy expenditure (or intake if the diet is eucaloric) needs to be provided as protein.

The effects of reducing daily protein intake to below 1.2 g/kg reference weight during a ketogenic diet include progressive loss of functional lean tissue and thus loss of physical performance, as demonstrated by Davis et al [21]. In this study, subjects given protein at 1.1 g/kg-d experienced a significant reduction in VO2max over a 3 month period on a ketogenic diet, whereas subjects given 1.5 g/kg-d maintained VO2max.

At the other end of the spectrum, higher protein intakes have the potential for negative side-effects if intake of this nutrient exceeds 25% of daily energy expenditure. One concern with higher levels of protein intake is the suppression of ketogenesis relative to an equi-caloric amount of fat (assuming that ketones are a beneficial adaptation to whole body fuel homeostasis). У вас нет необходимых прав для просмотра ссылок